File capabilities (fcaps) are capabilities associated with - well - files, usually a binary. They can be used to temporarily elevate privileges for unprivileged users in order to accomplish a privileged task. This allows various tools to drop the dangerous setuid (suid) or setgid (sgid) bits in favor of fcaps.

The patchset to enable this has been contributed by Serge Hallyn, a co-maintainer and core developer of the LXD and LXC projects:

In parallel to the kernel patchset we have now enabled LXD to preserve fcaps in user namespaces. This means if your kernel supports namespaced fcaps LXD will preserve them whenever unprivileged containers are created, or when their idmapping is changed. No matter if you go from privileged to unpriviliged or the other way around. Your filesystem capabilities will be right there with you. In other news, there is now little to no use for the suid and sgid bits even in unprivileged containers.

This is something that the Linux Containers Project has wanted for a long time and we are happy that we are the first runtime to fully support this feature.

If all of the above either makes no sense to you or you’re asking yourself what is so great about this because some distros have been using fcaps for a long time don’t worry we’ll try to shed some light on all of this.

Not too long ago the suid and sgid bits were the only well-known mechanism to temporarily grant elevated privileges to unprivileged users executing a binary. Once some or all of the following binaries where suid or sgid binaries on most distros:

The binary that most developers will have already used is the ping binary. It’s convenient to just check whether a connection to the internet has been established successfully by pinging a random website. It’s such a common tool that most people don’t even think about it needing any sort of privilege. In fact it does require privileges. ping wants to open sockets of type SOCK_RAW but the kernel prevents unprivileged users from using sockets of type SOCK_RAW because it would allow them to e.g. send ICMP packages directly. But ping seems like a binary that is useful to unprivileged users as well as safe. Short of a better mechanism the most obvious choice is to have it be owned by uid 0 and set the suid bit.

You can see the little s in the permissions. This indicates that this version of ping has the suid bit set. Hence, if called it will run as uid 0 independent of the uid of the caller. In short, if my user has uid 1000 and calls the ping binary ping will still run with uid 0.

While the suid mechanism gets the job done it is also wildly inappropriate. ping does need elevated privileges in one specific area. But by setting the suid bit and having ping be owned by uid 0 we’re granting it all kinds of privileges, in fact all privileges. If there ever is a major security sensitive bug in a suid binary it is trivial for anyone to exploit the fact that it runs as uid 0.

Of course, the kernel has all kinds of security mechanisms to deflate the impact of the suid and sgid bits. If you strace an suid binary the suid bit will be stripped, there are complex rules regarding execve()ing a binary that has the suid bit set, and the suid bit is also dropped when the owner of the binary in question changes, i.e. when you call chown() on it. Still these are all migitations for something that is inherently dangerous because it grants too much for too little gain. It’s like someone asking for a little sugar and you handing out the key to your house. To quote Eric:

Frankly being able to raise the priveleges of an existing process is such a dangerous mechanism and so limiting on system design that I wish someone would care, and remove all suid, sgid, and capabilities use from a distro. It is hard to count how many neat new features have been shelved because of the requirement to support suid root executables.

This is where capabilities come into play 1. Capabilities start from the idea that the root privilege could as well be split into subsets of privileges. Whenever something requests to perform an operation that requires privileges it doesn’t have we can grant it a very specific subset instead of all privileges at once 2. For example, the ping binary would only need the CAP_NET_RAW capability because it is the capability that regulates whether a process can open SOCK_RAW sockets.

The part most users are confused about is how capabilities get associated with files. This is where extended attributes (xattr) come into play. xattrs are <key>:<value> pairs that can be associated with files. They are stored on-disk as part of the metadata of a file. The <key> of an xattr will always be a string identifying the attribute in question whereas the <value> can be arbitrary data, i.e. it can be another string or binary data. Note that it is not guaranteed nor required by the kernel that a filesystem supports xattrs. While the virtual filesystem (vfs) will handle all core permission checks, i.e. it will verify that the caller is allowed to set the requested xattr but the actual operation of writing out the xattr on disk will be left to the filesystem. Without going into the specifics the callchain currently is:

and finally __vfs_setxattr_noperm() will call

For this article we will only focus on the permission checks that the vfs performs not on the filesystem specifics. An important thing to note is that different xattrs are subject to different permission checks by the vfs. First, the vfs regulates what types of xattrs are supported in the first place. If you look at the xattr.h header you will find all supported xattr namespaces. An xattr namespace is essentially nothing but a prefix like security.. Let’s look at a few examples from the xattr.h header:

As you might have figured out file capabilities are associated with the security.capability xattr.

In contrast to other xattrs the value associated with the security.capability xattr key is not a string but binary data. The actual implementation is a C struct that contains bitmasks of capability flags. To actually set file capabilities userspace would usually use the libcap library because the low-level bits of the implementation are not very easy to use. Let’s say a user wanted to associate the CAP_NET_RAW capability with the ping binary on a system that only supports non-namespaced file capabilities. Then this is the minimum that you would need to do in order to set CAP_NET_RAW in the effective and permitted set of the file:

After having done this we can look at the ping binary and use the getcap binary to check whether we successfully set the CAP_NET_RAW capability on the ping binary. Here’s a little demo: On kernels that support namespaced file capabilities the straightforward way to set a file capability is to attach to the user namespace in question as root and then simply perform the above operations. The kernel will then transparently handle the translation between a non-namespaced and a namespaced capability by recording the rootid from the kernel’s perspective (the kuid).

However, it is also possible to set file capabilities in lieu of another user namespace. In order to do this the code above needs to be changed slightly:

As you can see the struct we use has changed. Instead of using struct vfs_cap_data we are now using struct vfs_ns_cap_data which has gained an additional field rootid. In our example we are setting the rootid to 1000000 which in my example is the rootid of uid 0 in the container’s user namespace as seen from the host. Additionally, we set the magic_etc bit for the fcap version that the vfs is expected to support to VFS_CAP_REVISION_3. 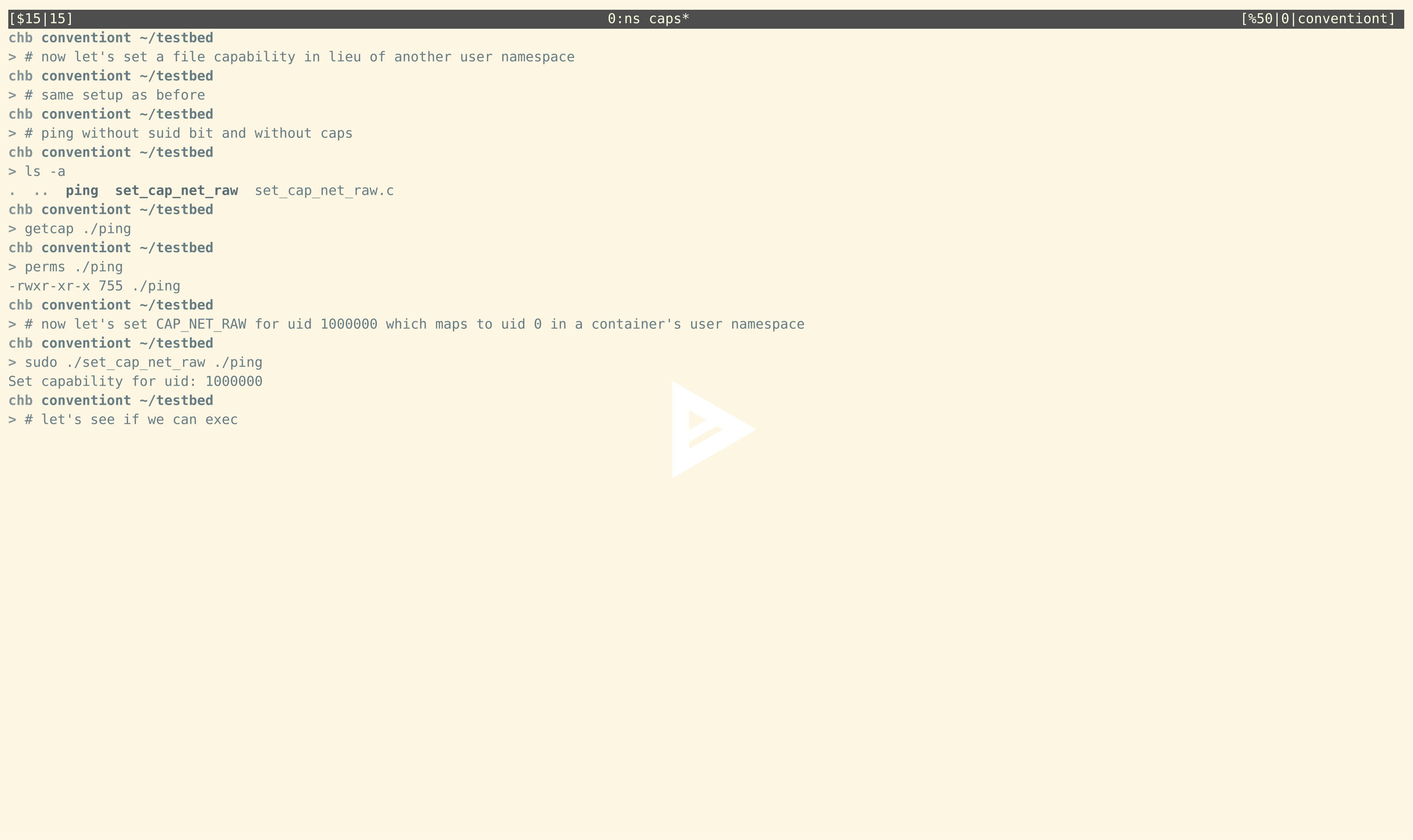 So let’s look at an actual unprivileged container and let’s set the CAP_NET_RAW capability on the ping binary in there: 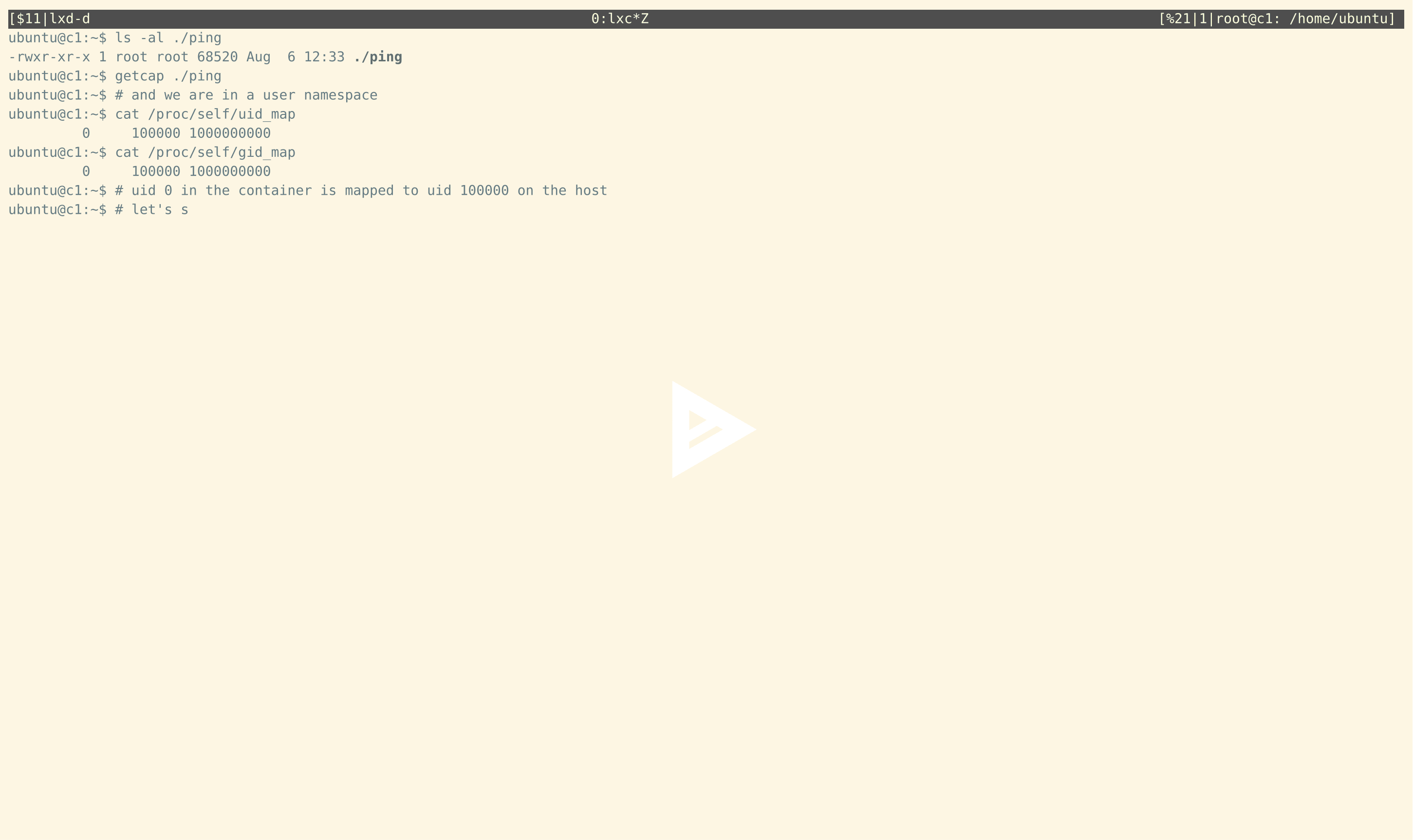 As you have seen above a new struct vfs_ns_cap_data has been added to the kernel: